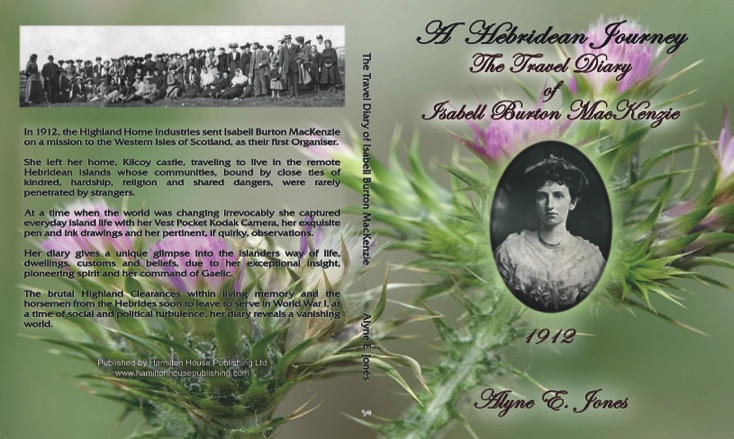 Anyone who holds on to stereotypes of the pre-First- World-War spinster lady traveller will have them quickly subverted by Isabell Burton MacKenzie. Mackenzie’s diary is a vivid, well-informed account of what life was like in the Hebrides back then - far distant from the modern world, hard and  materially  deprived, and yet a stronger and more cohesive community than  most of us can now imagine. The diary is firmly grounded in economic realities - the facts and figures expose the realities of the tweed industry, the Truck system, the pitiful wages paid to the women. At the same time  there are touching stories about individuals  -  the young girl going to school in an unknown world  among  strangers,   Ann Macdougall  living  alone in her dark cave on Berneray, supporting herself with her knitting, the length of the agents’ thumbs when they come to measure the tweed... such vignettes are well-supported by the fascinating photographs of a lost world.

In 1912 the Highland Home Industries sent Isabell Burton MacKenzie on a mission to the Western Isles of Scotland, as their first organizer.

She left her home, Kilcoy castle, travelling to live in the remote Hebridean islands whose communities, bound by close ties of kindred, hardship, religion and shared dangers, were

rarely  penetrated  by strangers.   At a time when the world was changing irrevocably she captured everyday island life with her Vest Pocket Kodak Camera, her exquisite pen and

ink drawings and her pertinent, if quirky, observations.

An annotated diary outlining the travels of the first organiser of the Highland Home Industries.